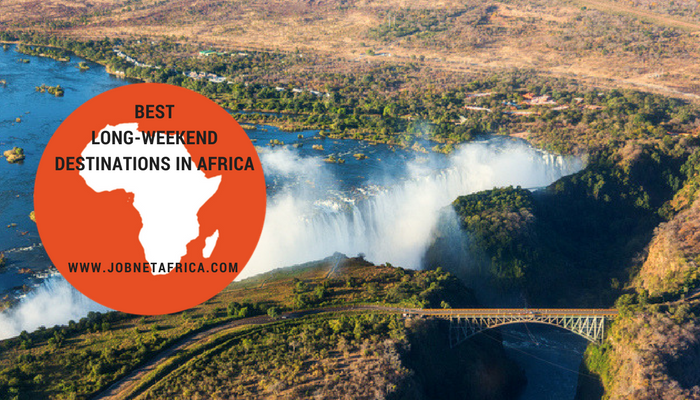 Since JobnetAfrica has a lot of expats living in Africa following us, we thought people who work hard, also need to play hard. This time our blog is written by guest blogger Grace Brennan from AllTheRooms and she has taken a closer look at the best long-weekend destinations in Africa, enjoy!

Two days never seem to be enough to soak up all a location really has to offer. Just when you feel like you’ve begun to explore, Sunday comes around and it’s time to leave. So naturally, we’re rejecting the 48-hour weekend and championing the long weekend! With beautiful wildlife, breathtaking scenery and fascinating traditions, Africa offers unlimited adventure opportunities. We’ve narrowed down the best long-weekend destinations in the continent to make sure you experience the most of Africa’s charm.

Located in southeastern Zambia, Livingstone is a welcoming town best known for being the gateway to Victoria Falls. As one of the Seven Wonders of the World, Victoria Falls is something every traveler in Africa must experience. Part of the Zambezi River, the one-mile-wide, 330-foot drop waterfall marks the border between Zambia and Zimbabwe.

If you’re feeling adventurous, the Devil’s Pool is open between August and January when the river levels substantially drop, allowing visitors to venture across the the top of the waterfall. The water movement slowly pushes swimmers to the edge of the drop, but they are prevented from going over by rock formations. The experience is certainly exhilarating and is completely safe -- guards are always on watch to offer emergency assistance. For an equally adrenaline-fuelled activity, go rafting in the Boiling Point -- the base where churning waters produce clouds of foam and turbulence perfect for extreme water sports.

or something more leisurely, stroll across the Victoria Falls Bridge. Transporting cars, trains and pedestrians 420 feet above the Zambezi River, the bridge offers breathtaking views of Victoria Falls, as well as guided historical tours to learn about the construction and impact on Zambian tourism.

Stretching 7 miles up the river, Mosi-oa-Tunya National Park is a great place to see a variety of wildlife in its natural habitat. From antelope to giraffes, warthogs to zebras, elephants to birds, the park is a flurry of colorful nature. Although relatively small, its charm is huge, and the landscape is unspoiled. Visit in time to watch the sunset over the horizon, casting a beautiful glow across the open plains, creating an authentic African safari scene.

Also known as the "Lake of Stars", Lake Malawi is the third-largest in Africa and a popular spot for travelers to relax and soak up a piece of paradise. Although Malawi is a landlocked country in East Africa, the vast tranquil freshwater meets golden sand shores, lined with an abundance of lavish green plants. Stretching 365 miles north to south, the northern section of the lake is particularly deep, reaching depths of over 2000 feet. Water sports enthusiasts flock here for activities including snorkeling, scuba diving, canoeing, and sailing. The clear water is ideal for spending a few hours marveling the exotic marine life and the thousands of fish species. Fishing villages border the lake edges, so once you’ve worked up an appetite, be sure to check out some of the mouthwatering dishes served in local restaurants. Afterward, enjoy dozing in a hammock by the waterfront, absorbing the postcard-worthy scenery.

Maasai Mara is a wildlife reserve home to over 40 percent of Africa’s larger mammals covering over 580 square miles through the Great Rift Valley. Dusty soil, rolling greenery, towering trees, and dense shrubbery are some of the diverse land types in the reserve that protect nearly a quarter of Africa’s diminishing ecosystems.

The Great Migration is perhaps the best-known event in the Maasai Mara, in which 1.5 million wildebeest, antelope, and zebras make the journey from the Serengeti to the Mara, looking for water and food. The migration is the only one of its kind in the world, in which multiple species undertake a collective physical transition, and is justly named a Natural World Wonder. Occurring from July through to September, the Migration is dependent on rainfall, which is highly unpredictable in the Serengeti. Additionally, the environment means the speed of the migration varies greatly; crossing the Mara River, for example, is troublesome for certain species. Nonetheless, what makes the spectacle so special is its spontaneity. If you’re lucky enough to get a sighting, you will have seen a true act of nature.

Want to see the Masai Mara from a bird’s eye view? Hot air balloon rides give a unique vantage point to take in the National Reserve, especially witnessing the black outlines of animals swarm across the sandy plains when the migration takes place. Spaces on both land and air safaris sell out fast, so it’s always best to book far in advance to guarantee a spot. Aim to take a tour with a Maasai guide as the local experts have detailed knowledge about animal behavior, history of the land, and conservation solutions.

Off the western coast of Africa, the island of Sal in Cape Verde is a haven for travelers looking to escape the noise and crowds of large African cities. The island-wide motto of "no stress" perfectly sums up life in the sunshine and on the sand. The name "sal" translates to "salt" and it’s no surprise that Sal has a history tied to salt mining. Head to the old Pedra de Lume salt mine, where visitors can float on the natural salt lake and learn about the industry that was once thought to have been capable of supplying salt to all of America. Once you’ve finished bobbing around on the water, walk around Santa Maria, the main resort, among the pastel-colored buildings and live music performances.

Sal is all about relaxation but there’s one activity sure to get your heart pumping: Wade into the water at Shark Bay to get a glimpse of lemon sharks’ fins circling in the waves. The opportunity is a unique way to get up-close to the creatures, but don’t worry, the sharks are predators only to fish. March through May is the best time for shark spotting.

Elsewhere, the rock pools of Olho Azul, which means "Blue Eye" in Portuguese, are found in the northwestern part of Sal. The shape of the volcanic rocks around the water means when the sun is at its highest in the sky, the rays reflect to make the hole seem like a beaming blue iris. Great for photos as well as diving into the warm water, the pools provide a great site for a picnic so you can enjoy lunch with a view of Mount Leste in the background.

Be part of history in the ancient land of Giza, on the west bank of the Nile in Egypt. The stunning location is filled with culture and history, transporting any visitor back in time to Egypt’s Old Kingdom. Gaze at the enormity of the Great Pyramids and imagine the construction process. Their construction remains one of the biggest mysteries in contemporary research, with historians baffled by the 481-foot (the highest peak) triangular monuments.

Towering above the flat sands, the Great Sphinx is an awe-inspiring structure depicting a lion’s body with a human head. Considering the lion was previously a symbol of the sun, it is believed that the mythical creature was built as a symbol of solar worship. Alternatively, another theory suggests that the Sphinx stands guard for the second pyramid, protecting Pharaoh Khafre’s tomb inside. Today the Sphinx is missing a nose and a beard (thought to be a result of weather erosion) but remains a magnificent design that conjures up questions about the labor capable of creating such a masterpiece.

When you need to take shelter from the beating midday sun, the Grand Egyptian Museum (also known as the Giza Museum) showcases a collection of King Tut’s tomb, along with a wide range of archeological artifacts. Situated on the same plateau as the Great Pyramids, the museum is another impressive display of architecture, and is the biggest museum in the world dedicated to a single civilization. Learn about ancient Egyptian customs, see intricate gold objects, and decipher hieroglyphic artwork all while navigating the museum intended to feel like a pharaoh’s funeral procession.

Wherever you are in Africa, find your home-away-from-home on AllTheRooms. AllTheRooms also gives you 5 reasons why Kenya should be your next vacation.