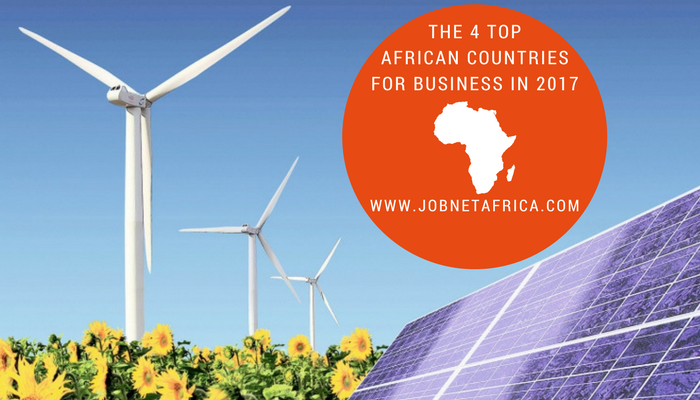 The 4 Top African Countries for Business in 2017

Given its 1.1 billion people that make up 15% of the world’s population, JobnetAfrica decided it’s time to take a look at the top African countries for business in 2017.

Many African countries were once exclusively dependent on agriculture and tourism, but a growing interest in technology and renewable energy led to new business opportunities in the region.

Mauritius is one of the top African countries for business in 2017 because of its focus on improving resources for the expansion of information technology (IT) and renewable energy sectors.

Historically, the region thrived on tourism, textiles, sugar, and financial services, but thanks to the shifting focus, entrepreneurs in these growing sectors have plenty of opportunities to grow in the developing country.

Rwanda is the second best place to do business in Africa according to the World Bank’s report. The region suffered for many years during its civil war but now, citizens and leaders stay committed to reform and continue focusing on improving the economy and business climate.

The most lucrative sectors for business in Rwanda include: Information Technology, Energy and Real Estate. (Check these two jobs in solar energy in Rwanda)

After successfully acquiring its independence, Botswana has one of the fastest growing economy rates per capita in the world. Traditionally, it has had the largest success in the areas of diamond and precious metal mining, but the government continues to push resources to different industries to diversify its economy.

Kenya rounds out our list of top African countries for business in 2017 because of its large investments in transportation, telecommunications, and energy.

For example, Google recently invested $700 million in a wind power and grid infrastructure project to improve renewable energy in the African country. Kenya also benefits businesses with availability to high-speed internet, a knowledgeable workforce, and a time zone compatible with Europe and Asia. It’s a great region for startups.

You can read more about the top African countries for business in 2017 on Velocity Global.