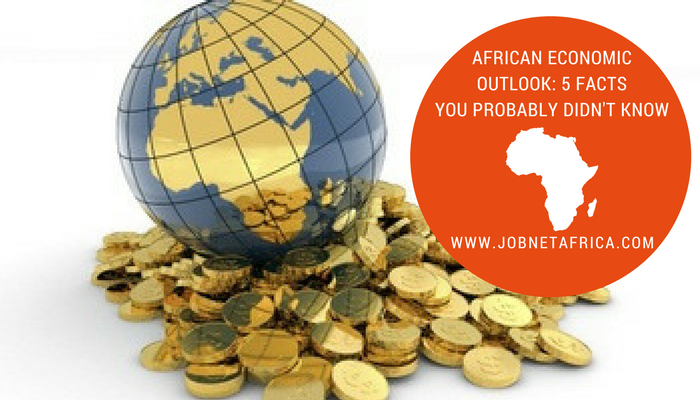 Did you know Africa has the highest proportion of entrepreneurs in the world? We at JobnetAfrica didn't, to be honest. In this blog you will also find some other facts you might find interesting, if not useful.

1. Nigeria and South Africa make up almost half of Africa’s GDP

Nigeria and South Africa account for nearly 50% of the continent’s GDP (at 29.3% and 19.1% respectively). Although both these economies have been struggling lately.

2. East Africa is the continent’s fastest-growing region by far

It is estimated that East Africa’s economy expanded by 5.3% last year. This is by far the fastest-growing region in Africa.

Ethiopia, which grew by 8%, was the leading country in the region, while Kenya, Rwanda, Tanzania and Djibouti all managed growth rates above 6% in 2016.

3. Morocco is the top intra-African investor

Overall, the past 10 years have seen Morocco’s financial institutions expand their sub-Saharan Africa footprint through numerous acquisitions across the continent, with Moroccan banks now present in more than 20 African countries.

4. Africa has highest proportion of entrepreneurs in world

Polls suggest that 80% of Africans view entrepreneurship as a “good career opportunity”, and the continent has the highest proportion of adults who are starting or running new businesses. However, the report noted that these entrepreneurs tend to operate in sectors where productivity remains low.

5. The continent could soon be home to the world’s largest free trade area

In 2015 negotiations were launched between African Union heads of state regarding establishing the Continental Free Trade Area (CFTA) – consisting of all 54 countries. The plan is for it to be implemented in October 2017 and, if successful, it will become the world’s largest free trade area by number of countries.

You can read more about these and other African economic facts on How we made it in Africa.