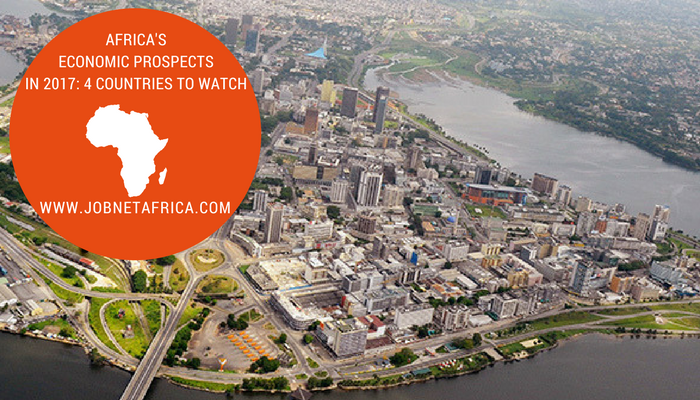 2016 was a tumultuous year for many African economies. The worst year for average economic growth in the region in over twenty years, according to a report from Ernst & Young. The continents big economies Nigeria and South Africa were struggling.

Looking ahead, those countries which have diversified their economies, focused on energy infrastructure, and promoted industrialization will be best poised to overcome the current challenges and succeed in 2017.

We at JobnetAfrica feel the 4 countries below are 'the' 4 countries to watch in 2017. Of course all African countries are interesting to follow, but we wanted to highlight these 4:

Côte d’Ivoire may well be Africa’s new economic powerhouse, with a diversified economy and growth in 2016 of over 8 percent, the second-highest in the world.  In the first nine months of 2016, some 5,720 new enterprises were started in the country and this trend will very likely proceed in 2017

Senegal has long been a bastion of political stability in West Africa, a reputation consolidated in 2016. According to the year-end update to Ernst & Young’s Africa Attractiveness Index, Senegal's GDP is expected to continue growing in the high single digits in 2017.

A largely diversified economic base, Kenya has largely been resilient through the emerging markets downturn of the last year. One of Kenya’s advantages has been its membership in the East African Community. On the other hand, the country faces not-insignificant political, security, and economic uncertainty in 2017 with presidential, parliamentary, and local government elections scheduled for August.

Ethiopia will, according to IMF estimates, be positioned to overtake Kenya as East Africa’s largest economy sometime this year. Investors continue to flock to Ethiopia, some $500 million in new foreign direct investment entered in the last three months of 2016, and its large internal market and low labor costs make it an attractive location to manufacture fast-moving consumer goods.

You can read more about Africa’s Economic Prospects on the the Atlantic Council.